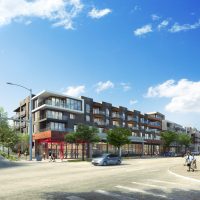 Henbart announced that it’s begun leasing the 70 units at Parque Kirkland, which was recently completed on the former site of a Wendy’s, at 312 Central Way. Graphite Design Group designed the four-story project, which was built by W.G. Clark.
Henbart’s Mark Craig said in a statement, “For Parque we will seek LEED Gold certification, but we also looked beyond LEED to ensure that our design and amenities also emphasis wellness.”

Such features include four-story, open staircase that offers south views to Peter Kirk Park, south across Central. Each residential level has a bike room, and the gym has Peloton bikes. All residential units have operable windows. Those are made by View Smart Windows, and automatically adjust their tint in response to heat, light and glare. Thus, says Henbart, no blinds are required.

Units run from studios to two-bedroom, with rents ranging from about $2,395 to $5,795 per month. Sizes run from about 600 to 1,140 square feet. The leasing website says move-ins will begin next month.

In the 17,613 square feet of retail/commercial space, Bartell was indicated as a tenant well before the groundbreaking in the fall of 2019. Since then, 5 Stones Coffee and Arleana’s Seafood and Soul have been signed. There’s also some office space on the second floor, now apparently leased.

Henbart acquired the Wendy’s property five years ago for $3.2 million, well before Kirkland Urban began opening its apartments and offices — most of the latter are occupied by Google, which also now owns most of that 12-acre development. Kirkland Urban also has a new QFC only steps away from Parque.

Total project size is estimated at 144,151 square feet, excluding the two levels of underground parking. Most if not all of that are stacked, with the automated system made by CityLift. It moves both vertically and horizontally, to slide cars in and out of the steel frame.

Henbart offers a century of experience in the acquisition and development of real estate. Our success is measured by the quality of our real estate assets.