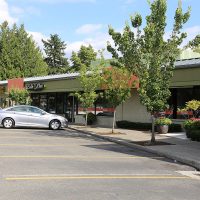 REDMOND — A strip mall at 16651-16717 Redmond Way has sold for almost $6.9 million, according to King County records.
The buyer was HBC Redmond LLC, which is associated with Henbart.

No new plans have been filed for the midblock site, which is steps away from the future Downtown Redmond Station, where light rail service will begin in 2024. The city has upzoned that area for more height and density. The seller was Victoria Center LLC, a California investor that had owned the property for decades. Brokers were not announced. The deal was worth about $184 per square foot for the land.

Developed on 37,356 square feet in the 1940s and 1960s, there are three one-story buildings with about 13,073 square feet, plus surface parking. Tenants include Kringle’s Bakery, The Lash & Wax Boutique, Emerald City Smoothie and Kanishka Cuisine of India. Three old low-rise retail properties to the west of the Henbart site have two owners; there’s also a vacant city-owned triangle on its east side.

Henbart offers a century of experience in the acquisition and development of real estate. Our success is measured by the quality of our real estate assets.